Everything's going to come out... 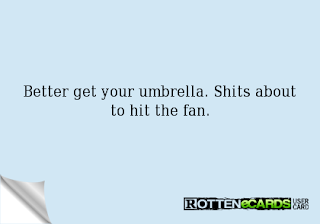 Image courtesy of rottenecards. I feel really bad for her. He's going to read this. Since Mr. maturesexforolderwomen - yep that's his email address! has subscribed to my blog. I also feel really bad for myself. I feel exposed. Naked. Intruded upon. This is my outlet. For me. I don't write for anyone else. I know now and again I have a post specifically for her. But mostly, it's a way to get out what I'm feeling. To talk to myself. To reason with myself. It helps me to make sense of things. When I write it, I see it in a different light, I can answer my own questions. Now do I even have that? If I'm brutally honest on my blog and he's still reading it, then I feel it's not fair to her. Because this stuff was meant to 'stay between us'. But I need an outlet. I don't write about the sex stuff etc. because my mother reads it. But I don't need to talk about that. I talk about that with my SIL. This is for my emotions, my feelings, her words that confuse the hell out of her but mean everything to me. I understand her, when she does something, I know why she does it. When she says things, I can make sense of them for her. That's why I need my blog. I guess deleting the posts wasn't good enough, since they come to your email directly written - clever that. Unless you don't want them to. I'm also angry that he's snooping on her, on me, on us. If he's snooping here, where else is he snooping? My FB? Her FB? That's different, that's a social networking site, that's not so bad. But he shouldn't be snooping on her already. What sort of weirdo subscribes to your lover's wife's blog?!? See, I always feel so much better when I write on here. I suppose I could switch to the old traditional form of journalling. But then my wrist would hurt, and when I was hurting December 2012, I wanted to read someone else's experiences. So perhaps this will help someone else. I don't know. All I know is I've got to keep writing, whether it's here, or somewhere else...
Posted by Mrs and Mrs Murder at 19:57 No comments:

Email ThisBlogThis!Share to TwitterShare to FacebookShare to Pinterest
Labels: emotions, getting her back, her, HIM, image, maturesexforolderwomen

Still reading. I'd stop if I were you. There's things you don't want to know. This is my private space. My private thoughts and my private world. My shit. Not yours. I will blog about everything that happens. So I suggest you stop reading. How fucking dare you? How dare you read my blog, let alone subscribe to it. You're a wanker. And you treat my girl like shit. No wonder your wife was pleased you left. I don't know what the hell mine is thinking to be going anywhere near you. And I would drive to see her on my lunch break. I'd drive to see her for one minute. It's called love. It doesn't matter if you're watching paint dry, you're still together. Oh and your message yesterday, bang out of order. "sounds like so much fun, I can barely contain myself" just remember, there's always someone grateful to have what you don't want. Now fuck off.
Posted by Mrs and Mrs Murder at 18:36 No comments:

There's a saying isn't there: "fool me once, shame on you, fool me twice, shame on me" what happens if it happens a third time then?! I'm in a different boat than I was last time, this time my boat feels more secure, yet less safe.  This time, instead of leaving because of me and my actions (or lack of them), she's been having an affair for 4 months, and has fallen 'in love'with him.  Love my arse, infatuation more like.

I've had a rough 4 weeks, yeah it's been 4 weeks since she told me. And she's still here. He's married, 40 and living with his wife.  So until the end of the month she's still living at home.  I won't lie, it can be incredibly hard.  It can be awful to hear her on the phone to him, it can be awful to have her receiving 50 texts an hour, it can be horrible to watch her get dressed up and head out with him.  But there are times when it's nice too.  When we're sat on the sofa and we're just watching a film together, you'd never guess what was going on.  When we're out shopping or whatever it can be nice.  We still have fun, and we still feel the emotional connection, but for her, she doesn't feel the love that she should.

She's been a complete bitch at times, talking to me as if I wasn't her wife.  Telling me how she's so happy, is spending the night in a hotel with him, or how he makes her feel good (she claims she has no idea why that's wrong).  And other times she's been, no wait, no that's it.  She's been bearable or a bitch, that about sums it up!

There's a lot of things that I have a hard time getting out of my mouth.  Either because I'm too frightened to say them, or because they're too hurtful to say, and that's why I'm back, here, where I never should've left, because this was always an outlet when I needed one, and I stopped using it.

On a side note, my mental health has been pretty great this past year, no major problems, few ups and downs but nothing to write home about.  I've maintained my changes, which I'm so proud of myself for since I worked so hard to change, to improve myself.  And I won't stop, I will always try to improve myself.  There's no better feeling than at the end of the day thinking that you did your best.

I feel like such an idiot at times for taking her back after the last affair, then in the next second I know at the moment, I'd still take her back from this.

I hope when she does go, she's gone long enough for me to move on.  For me to stop feeling like this about her.  It's ridiculous.  I'd never watch someone be treated like this, I'd advise my friends to ditch her ass and get her out, and once the door was shut, it was shut for good.  After all, who wants someone who is a serial cheat and is more willing to work on a 'relationship' they've had for a few weeks than a marriage and partnership they've had for 9 years? Me apparently.

My mood is fluctuating with the wind, so I may well be back writing later how much I hate her, or how much I love her, or both.

I know that I'd like to smack him one though.  I don't often condone violence, but right now, that's what would make me feel better!
Posted by Mrs and Mrs Murder at 15:52 No comments:

Email ThisBlogThis!Share to TwitterShare to FacebookShare to Pinterest
Labels: 2014, affair, her, Love, stupid

Before the end of the month, we will be moving.  This is our first home, first time without parents.  First time in control of the remote!

On a more serious note, it's been stressful.  My mood has sprung up and down a lot these past few weeks and I'm finding it more difficult to hide it.  Suffering in silence is harder than it seems.  The Mrs is also depressed at the moment, due to guilt read about it in the previous post,  thinking she doesn't deserve me?!? And worrying I'll leave her, again ?!?!?.  So much of my mental energy has been taken up by ensuring she's ok and feeling secure, and attempting to make her happy or at least see the positive side of things.

Ultimately this all has a toll on me, but hey, it's my time to carry her.  I told her last week that "it's the least I can do coz when I fell you pulled me through, so you know that I'll carry you"

I hate seeing her down, that gets to me as well.  I worry that I can't make her happy, but to be truthful, until we had all this stress we were happy.  So I hope that when we've settled into our new home both our moods will pick up.  We're both extremely excited as well.  Can't leave that out.  It's our first home, we've had so much fun choosing all our furniture and I'm sure we'll have double the fun during the late nights it's going to take us to put it together
Posted by Mrs and Mrs Murder at 18:42 2 comments:

Visit's to The Blog

The In's and Out's of a Not So Borderline Mind

What I Blog About